Chinese and Japanese Youth Work Together to Grow Together

The China-Japan Youth Dialogue on October 30 explored cooperation between Chinese and Japanese youth to mark the 50th anniversary of the normalization of diplomatic relations between China and Japan.

Titled "being good neighbors and making progress together", the webinar drew about 70 Chinese and Japanese participants. Fu Zhenbang, Vice-President of the All-China Youth Federation (ACYF), and Kurose Toshifumi, Director-General of the Japanese International Youth Exchange (JIYE) of the Cabinet Office, delivered video messages.

Fu Zhenbang, Vice-President of the All-China Youth Federation, and Kurose Toshifumi, Director-General of the Japanese International Youth Exchange of the Cabinet Office, attend the China-Japan Youth Dialogue on October 30 via video link.

In his speech, Fu noted that youth exchanges between China and Japan began in the 1950s and made important contributions to the normalization of China-Japan relations. The first China-Japan Youth Gala in 1965 and a big celebration of nearly 3,000 people in 1984 both made quite a mark in the history of bilateral relations and world diplomacy.

Human societies around the world are now facing unprecedented difficulties and pressures, and China and Japan as important countries in Asia and the world must join hands to promote peace, friendship and cooperation, he said.

Fu also said he hopes the young people of China and Japan will carry forward the idea of friendship, strengthen mutual learning and extend cooperation in a pragmatic fashion.

Kurose said that the Cabinet Office of Japan and the ACYF have jointly fostered the Japan-China youth exchange program for a long time, which has promoted mutual understanding between the young people of Japan and China, widened their international perspective and cultivated their spirit of international cooperation.

He encouraged the young people of the two countries to take a more active part in the dialogue so as to enhance understanding and grow together through exchanges.

Wu Huaihe, Deputy Director of the Institute of Japanese Studies at the Chinese Academy of Social Sciences, gave a lecture themed on "review and prospects of the 50 years of China-Japan relations" during the webinar.

Wu said that since China and Japan normalized diplomatic ties, the two countries have enhanced political, economic, social and cultural exchanges and cooperation. The overall stable growth of their bilateral ties has contributed to the prosperity and development of the region and the world at large, Wu said, while underlining that the bilateral friendship and cooperation have brought benefits to the two countries and peoples.

He also called for the two youth groups to reaffirm their original aspiration and meet each other halfway to move towards a bright future for mutual benefit. 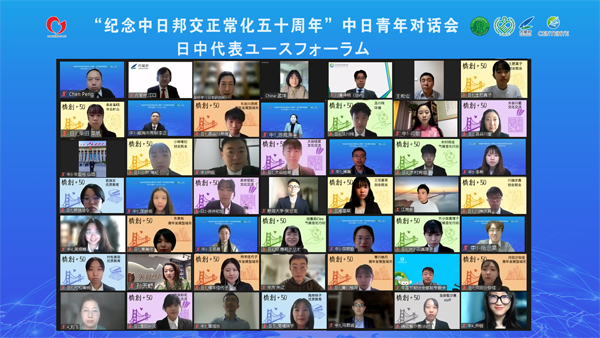 The China-Japan Youth Dialogue is held on October 30 to celebrate the 50th anniversary of the normalization of diplomatic relations between China and Japan and to discuss China-Japan youth cooperation.

The meeting was co-hosted by the ACYF and the Cabinet Office of Japan, and organized by the JIYE and the China International Youth Exchange Center.