The China International Youth Exchange Center (CIYEC), in cooperation with the China Young Leaders Program, organized a Generation Z Youth Camp from August 7 to 12 in South China's Guangdong province. More than 30 students from universities such as Peking University, Tsinghua University and Zhejiang University, along with 20 international students from 16 countries who study in China, participated in the camp activities and visited Guangzhou and Foshan cities.

Participants of the six-day Generation Z Youth Camp pose for a group photo during the activity.

With the theme of "Exploring the Guangdong-Hong Kong-Macao Greater Bay Area", the camp was designed to encourage young Chinese and foreign people to learn more about the development of the Greater Bay Area (GBA) and Lingnan culture (or Cantonese culture).

Participants visited the Guangzhou Urban Planning Exhibition Center, the International Center for Digital Innovation of Art Port, Guangdong Industrial Design City, Bright Dream Robotics Co, the Guangzhou's K11 Mall, the South China Botanical Garden of the Chinese Academy of Sciences, and the Haizhu Wetland. The field trips have allowed them to understand more about the history, economic and sic-tech development, and local customs and practices, culture and entertainment of the GBA. 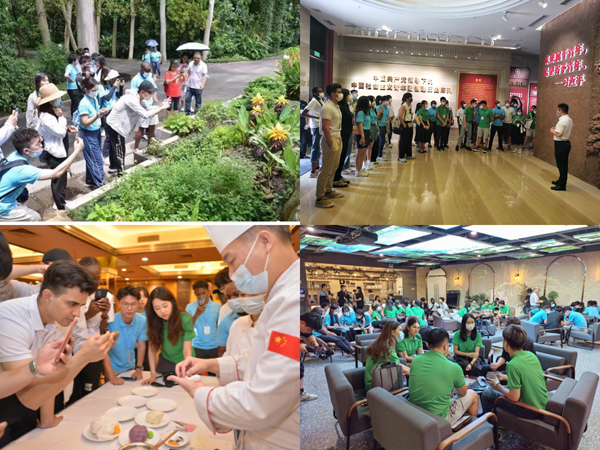 Highlights of the Generation Z Youth Camp from August 7 to 12.

A consensus was reached through the six-day camp that the GBA is full of vitality and offers diversified growth and development opportunities for young people, including those from different countries and Hong Kong and Macao, and is an irresistible magnet to young talents.

The camp serves as a platform for communication and exchanges among young people from different cultural backgrounds. It helps them better understand the typical Lingnan (South China) styles and explore new paths for employment and entrepreneurship.

Some students said that youth and innovation are the two key words of the GBA and power the regional development. They also said they hope to participate in the area's construction in the future.

This activity is an attempt to draw youth at home and abroad together in an exchange activity, aiming to stimulate the innovation and creativity of Gen Z and enable them to discover the value and opportunities for youth in the GBA.