The Sino-Japan Economic and Trade Cooperation Fair and the 4th Liangma Silk Road International Forum were held on July 17 in Beijing. More than 80 young entrepreneurs from China and Japan attended the event.

The event was organized by the China International Youth Exchange Center (CIYEC) and the Junior Chamber International of Japan (JCI Japan), and supported by the Japanese Chamber of Commerce and Industry in China (JCCIC), the Japan-China Economic Association (JCEA) and the Administrative Committee of the Beijing Daxing International Airport Economic Zone (BDIAEZ).

Representatives of China and Japan discuss cooperation and exchanges between young entrepreneurs of the two countries on July 17.

CIYEC Deputy Director Zhang Hua stressed that promoting international exchanges and cooperation among young entrepreneurs is necessary for deepening international youth exchanges. He said that the CIYEC has continuously stepped up efforts to facilitate economic and trade cooperation and tap the positive role of young entrepreneurs in promoting global economic recovery and sustainable development.

Noting that this year marks the 50th anniversary of the normalization of diplomatic relations between China and Japan, an important milestone in the history of China-Japan relations, Zhang said he hopes that young entrepreneurs from both sides will enhance their communication and work together to promote the sound development of bilateral relations.

Kanno Joe, Vice-President of JCI Japan, reviewed the development of cooperation between the two sides. He said that JCI Japan has always regarded the CIYEC as an important partner and that their bilateral cooperation has borne fruit in people-to-people exchange and practical cooperation.

Kanno also expressed the hope that the two sides will further cooperate to overcome the negative impact of the COVID-19 pandemic and work together to promote economic and trade exchanges and cooperation in an effort to deepen non-governmental exchanges and contribute to peace and development in Asia and the rest of the world.

Kawai Gen, Director of the JCEA Office, Beijing, said that the rapid growth of the digital economy and emerging industries such as electric vehicles has shown the resilience of the Chinese economy, and added that the JCEA is glad to see young entrepreneurs from both sides continue to enhance mutual trust and move forward hand in hand.

Tetsuki Matsuoka, Director of the JCCIC Affairs Bureau, underlined the importance of the Sino-Japan Economic and Trade Cooperation Fair at the 50th anniversary of the normalization of China-Japan diplomatic ties. He called on people from all walks of life in both countries to pay more attention to small and medium-sized enterprises and young entrepreneurs so as to inject vitality into the development of China-Japan relations.

Liu Jinghua, Deputy Director of the China Economic Cooperation Center (CECC), said that the Liangma Silk Road International Forum has received positive public reaction since its launch. The CECC hopes to work with CIYEC and other friendship organizations to deepen bilateral exchanges and cooperation in various fields and to play a more important role as a bridge linking the two countries. 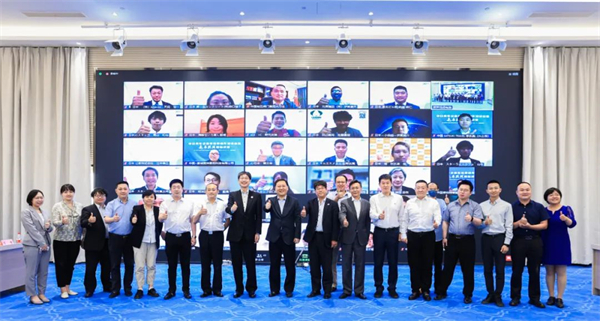 Chinese and Japanese representatives pose for a group photo after the fair on July 17.

A business matching meeting was also included in the fair. The participants had in-depth exchanges on cooperation in biological medicine, environmental protection technology, modern services, agricultural development, infrastructure construction, building materials, cross-border e-commerce and other fields. More than 20 initial statements of intention to cooperate were reached.

Participants said that the fair is conducive to deepening practical cooperation between young entrepreneurs of China and Japan and enhancing confidence in business development, especially in the context of the sluggish world economy.