The China International Youth Exchange Center (CIYEC) held a photo exhibition in celebration of the 30th Anniversary of Independence of the Republic of Kazakhstan on December 14 at the Century Theatre in Beijing. 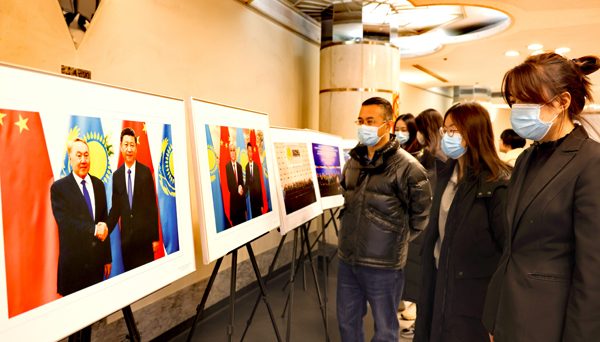 Visitors review the history of exchanges between China and Kazakhstan on Dec 14 at the photo exhibition held by CIYEC.

Zhang Hua, Deputy Director of the CIYEC, said that since the establishment of diplomatic ties between China and Kazakhstan the two countries have increasingly enhanced youth exchanges and explored new forms and fields of cooperation.

Noting the efforts to lead young people to participate in the high-quality development of the Belt and Road Initiative, Zhang said that youth organizations of China and Kazakhstan have launched many exchange activities and cooperative projects to enhance the friendship between the young people of both countries.

The year 2022 marks the 30th anniversary of the establishment of diplomatic ties between China and Kazakhstan. Zhang said that he hopes that the youth of the two countries will further deepen mutual learning and cooperation, contributing to pushing China-Kazakhstan relations to a new high and facilitating the sound development of bilateral relations.

The Chargé d'Affaires at the Kazakhstan Embassy in China addressed the opening ceremony of the photo exhibition, indicating that three decades of independence has become an era of economic progress and sustainable development for Kazakhstan, making it the largest economy in Central Asia.

He said that since the establishment of diplomatic ties between Kazakhstan and China, the two countries have made a historic leap from good-neighborly friendship to permanent comprehensive strategic partnership, promoting regional stability and common development.