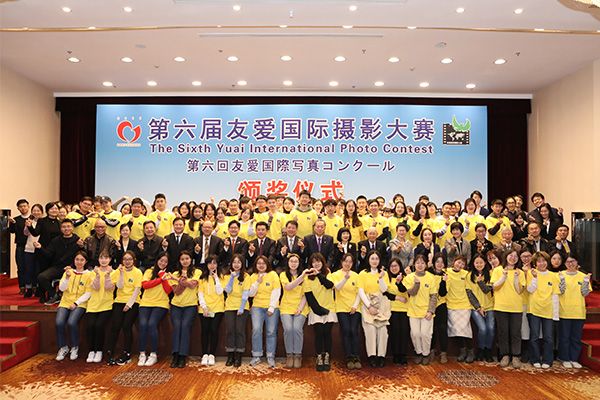 Participants of the awards ceremony of the 6th Yuai International Photo Contest pose for a group photo on Dec 11, 2019, in Beijing.

The prize-awarding ceremony of the sixth Yuai International Photo Contest, co-organized by the China International Youth Exchange Center (CIYEC), the Beijing Youth Federation and the Japanese Yuai Association (a nonprofit organization encouraging fraternity), was held on Dec 11, 2019, in Beijing.

Leaders of the All-China Federation of Youth and the CIYEC, along with Japanese representatives attended the ceremony. Members of the delegation of the Yuai Association, contest judges of both sides, winner representatives, and more than 200 students from Beijing Foreign Studies University and Beijing Language and Culture University (BLCU) were also invited to the event.

During his visit to China, Yukio Hatoyama, President of the Yuai Association and former Japanese Prime Minister, participated in the Yuai Scholarship Award Ceremony held by the BLCU and gave a lecture. At the second Yuai Salon hosted by the CIYEC, he said that he will endeavor to encourage youth to cement mutual understanding through diverse exchange activities, and help create a favorable environment for improving bilateral ties.

Selected winning works of the photo contest were displayed at the ceremony. Some recorded beautiful moments in human society and the natural world; and others showcased the young photography enthusiasts' dreams and praised harmony between humans and nature.

The Yuai International Photo Contest, an annual activity to enhance youth-to-youth relations of mutual understanding and friendship, was launched in 2014, and has caught the eyes of photographers from dozens of countries, who have submitted nearly 60,000 excellent works.

It has become an important platform for young people to spread positive energy through pictures and an influential project to promote cultural exchanges between Chinese and Japanese youth.