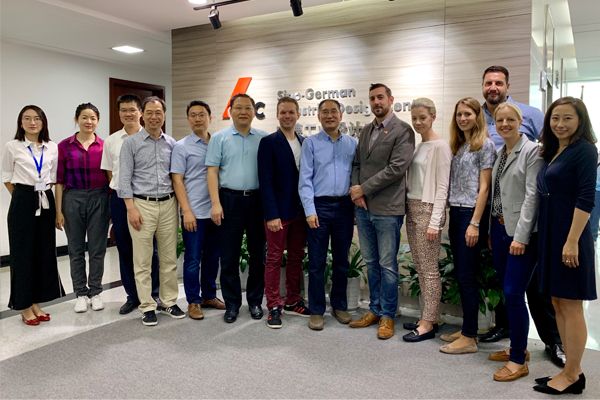 Chinese and German representatives pose for a group photo during their visit to China from September 23 to 28.

The China International Youth Exchange Center (CIYEC) invited the German Young Entrepreneurs Association (GYEA) to China from September 23 to 28, 2019. Ma Xingmin, Director of the CIYEC, and Zhang Hua, Deputy Director of the CIYEC, met with the eight-member delegation led by GYEA President Florian Grosner, and the two sides exchanged their opinions on boosting practical cooperation between Chinese and German young entrepreneurs.

"Germany is an economic power where small and medium-sized enterprises boom and serve as an irreplaceable pillar of maintaining the steady development of the country's economy," Ma noted, adding that young entrepreneurs of the two countries are expected to strengthen their exchanges and push forward practical cooperation of different kinds so as to bring China-Germany youth exchanges to a higher level.

As part of their visit to China, delegation members conducted a field trip in Weihai and Yantai,  cities of East China's Shandong province to learn more about the local business environments and industry development.

They looked over key industrial parks and key enterprises, such as the Weihai Carbon Fiber Industrial Park, the Weihai Industrial Park for Trade in Services, Yantai Xingye Machinery Co, and a national cloud service center for the Belt and Road Initiative, and were highly appreciative of the business situations involved, expressing their desire to invest in China.

The GYEA consists of numerous outstanding young entrepreneurs and senior executives in Germany, and holds a balanced position in the commercial field. Its members cover all walks of life and occupy nearly 300,000 posts. The association is the only youth organization qualified to communicate with the German Parliament and propose its own economic views.